I escape the city as often as I can to go and watch the water. My studio is located in Downtown Brooklyn, where cranes and construction rule the day as more and more tall towers clutter the horizon. Nonetheless, located as it is on the extreme western tip of Long Island, Brooklyn is of a piece with the pristine beaches that stretch one hundred and twenty miles to the east. The Atlantic Avenue train station is my doorway to heaven, closing on traffic-clogged, littered streets and opening onto the littoral, the blue sky and waves of the Atlantic Ocean.

I frequently carry a portable easel and my oil paints, working directly from the motif in the “plein air” style of 19th-century landscape painters. Inspired by the great painter of murals at the Museum of Natural History, James Perry Wilson, I use a ten-color palette which contains no greens, meaning that all my greens are mixed from blue, yellow and other hues. My larger paintings are made in the studio using sketches and photographs, but my true guide is nature itself, etched in my mind from hours spent observing the interactions of the elements. Watching water is a wonderful way to experience the power and subtleties of nature, and to truly see.

I very much enjoy watching the dynamic interactions of people and the sea, and a great many paintings have resulted from this observance. I include here two large paintings of my stepsons, who were playing with a skimboard, which I removed from the image to create  disconnections that suggest very different meanings, microcosm to macrocosm.
I am inspired by a love of nature and a desire to see it preserved in an unspoiled state, a situation becoming more and more difficult in our current world. I feel that painting in the midst of urban chaos gains a little poignancy from this juxtaposition of hope and harsh fact. Whether the paintings themselves are imbued with any special qualities due to the locale of their making, I can’t say, but what I do appreciate is the literal, physical connection of Brooklyn to the beach--the fact that the great outwash plain under my studio eventually ends facing the ocean. And I like to think that feeling comes through in the paintings.

In 2010, I revisited the paintings, imagining a 16-foot rise in sea levels, caused by the Greenland ice sheet sliding into the ocean. In 2012, Superstorm Sandy struck, with a 16-foot wall of water.

The water has receded, for now, but the area was completely transformed, covered with sand from what was once a long line of huge protective dunes.  Post Sandy, I visited the barracks once again and found a landscape covered by a blizzard of gray sand. The paintings now come in sets of three: before, during, and after. 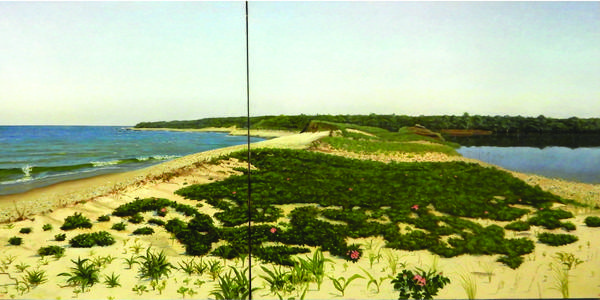 The welcome return of spring surely has our minds turning to thoughts of spending time  outdoors—even here in the concrete-covered corner of urban Brooklyn.  Sometimes it’s easy to forget that the stresses of the world can be put into perspective simply by taking a few moments to meditatively decompress along the seawall, allowing the warm breezes to carry the scent of the sea and a calming alliance with nature.  I cannot recommend this introspective activity enough in these tumultuous, troublesome times.

The paintings of Frank Lind invite us to delve even deeper into the experience, to truly notice the details that shape this solitary but satisfying experience.  Through his seascapes we are offered a glimpse of the life hidden from  our immediate, casual vision: the mermaid hair grass and clumps of barnacles affixed to rocks, waiting for high tide; the interplay of colored rocks lying along the littoral; and the beguiling ballet of gulls harvesting their breakfast from the unsuspecting crustaceans in the morning surf.

The impressive scale of his paintings parallels the importance Lind sees in this close reading of experience.  Like his nineteenth-century predecessors—Frederic Edwin Church, Albert Bierstadt, and Thomas Moran—Frank Lind elevates the status of landscape by drawing us into the details of his vast canvases.  At the same time, other passages may remind the viewer of seascapes by Gustave Courbet or Claude Monet, or of cloud studies by John Constable.  Lind’s deliberately limited ten-color palette, adopted from that employed by the artist James Perry Wilson (1889-1976), belies the complexity of his compositions while presenting a unique style that underlies  an equally inimitable vision.

Lind’s seascapes are both a paean and a warning, however.  Rising sea levels caused by global climate change are depicted in his Sea Level series, a number of which are on view in this exhibition.  Much like the French painter Hubert Robert (1733-1808), who painted imagined scenes of the Louvre in ruins, Lind presents us with the devastating future effects of global warming here in Brooklyn.  Several of the works show the aftermath of Hurricane Sandy, which occurred during the period of the series.
This exhibition also offers a glimpse at the artist’s process through a number of studies for the larger paintings on view. The evident changes from study to finished work reveal solutions to artistic problems that occur in the transition between the two scales—-important object lessons for our Fine Arts and Graphic Design students.

We are thrilled that Frank Lind has offered two of the works on view, Discobolus and Maestro, to Kingsborough Community College for its permanent art collection.  These companion paintings, thematically relevant to our location, will undoubtedly become an integral part of the campus experience for generations of students and faculty to follow.  On behalf of the Kingsborough Art Museum, I welcome you to Time & Tide: Paintings by Frank Lind, and hope that these works will encourage you to appreciate, enjoy, and protect the natural beauty that surrounds us.

A native of Woonsocket, Rhode Island, Frank Lind came to New York in 1971 after graduating from Georgetown University.  He received his MFA from Pratt Institute, Brooklyn, where he later served as Chair of the Fine Arts Department (1991-99), as well as Acting Dean and Dean of the School of Art and Design (1999-2009).  His work has been exhibited in numerous exhibitions nationwide, including solo shows at Brown University (RI), Tenri Art Center (NY), and Galerie 240 (Ottawa). 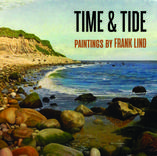